How the Etac Turner Helped Kate Davies After Her Stroke

Kate Davies was an academic with a Ph.D. in literature, lecturing at Newcastle University before her life changed forever. She enjoyed a physically active lifestyle in Edinburgh, Scotland, but suffered a stroke during an early commute in 2010.

She was alone on the roadside and unable to move until a GP luckily noticed her plight and organised an ambulance to transport her to the nearby Western General Hospital.

After tests and an MRI scan, it was revealed that Davies had suffered two strokes caused by blood clots and a hole in the heart that Davies was unaware of. She had to undergo surgery to resolve her heart condition, but the brain injury resulted in paralysis on her left side as well as speech and coordination issues.

During her time undergoing specialist rehabilitation, Kate was introduced to the Etac Turner Pro, and it was instrumental in her initial rehabilitation.

The Etac Turner Pro is an ergonomically-designed and easily transportable turn aid that offers safe turning with standing support. It’s widely used by many carers concerned about risk of injury when moving or transferring patients.

It is designed in a way that still allows the user to communicate and maintain eye contact with their carer. It also encourages natural standing/sitting movement for the user. With its balanced design, standing transfers from seats, beds, toilets and wheelchairs are safer and encourage mobility for users with restricted movement.

From ‘Manhandling’ To Independence

The Etac Turner Pro began to help significantly with Kate’s confidence and morale. She was previously uncomfortable with how she was being handled in the hospital, but she also knew that medical professionals were doing the best they could. Now, the Etac Turner Pro offered a non-contact way of transferring that made her feel a little bit better about the experience. Davies appreciated the fact that it was a much improved way of transferring her to beds, toilets, and wheelchairs.

Kate explains: “If you suddenly become disabled you do not know how to move your body around or how anybody else is going to move you. If you are in a hospital context you are moved around by many different people and they may not know how you prefer to be assisted. As I have a small frame, I would be regularly manhandled from one position to another – I was not comfortable with this. I fully appreciate that the NHS staff were helping me in a professional manner so I did not want to keep saying ‘please don’t handle me like this’. This is where the semi-independency provided by the Etac Turner was massive – it offered a non-contact way of transferring me. With my interest in design, I was blown away by this piece of equipment the first time I used it.”

Regaining Strength, In Both Body And Mind

She felt like she was more self-determined after using it and enjoyed the fact that she felt more independent.

After two or three weeks, Kate was able to pull herself into a standing position with the Etac Turner Pro, even with only limited movement in her left hand. Davies even recognises that the Etac Turner Pro helped her feel more positive about her recovery in general, and she grew possessive of it.

“The Etac Turner helped me regain strength as I trained the undamaged part of my brain to operate my left side. Within two-to-three weeks after my stroke I had developed limited movement in my left hand and was able to pull myself up to a standing position with the Turner.”

“It is an incredible device that motivates you to move and through a counter balanced operation, there is no contact between user and assistant, hence you feel more self-determined and embodied. I would use it several times a day with the assistance of a nurse or physiotherapist, it was fantastic. I even became quite possessive of the Turner as it was so essential to my development and positivity. When it was taken to another hospital department I would say ‘where’s my Turner!’”

Kate felt stronger every time she used the Turner Pro, and felt the benefits permeate throughout her body from the very beginning – “Every standing transfer would make my body stronger, particularly my back, and halted the possibility of muscles wasting away…. You have to keep mobile, it is so important not just for physical strength and coordination, but for better breathing, digestion and circulation…. even just reaching out for the product in the early stages was therapeutic.”

Thanks to Davies’ determination and dedication, she recovered and moved on with her life. Kate has decided not to return to her role as a lecturer because it is so physically demanding.

However, that hasn’t stopped her from working towards some incredible goals. A decade after experiencing a stroke, Kate has truly recovered magnificently in terms of mobility and strength in her left side. She has also started a business, Kate Davies Designs, as a source for downloadable knitting patterns. Knitting was one of the activities that helped Kate the most through her rehabilitation, and Kate loves the fact that the hobby combines both creativity and discipline.

She believes that knitting helped her understand the importance of “always moving forward’, which was integral to her rehabilitation. Kate also manufactures yarn herself and supports a range of Scottish suppliers. She has now evolved the business to a successful knitting company, and she has diversified into selling ready-made garments.

Kate Davies has been busier than ever, and regularly works with museums and heritage organisations. She has also contributed to BBC TV and radio programmes, as well. The award- winning designer has also recently launched a book called “Handywoman”, focusing on the fact that her disability has changed her attitude for the better. The book is a series of essays detailing her recovery, and the way that her mindset has changed since her stroke. The Etac Turner Pro is even highlighted in the book, as she writes that it was important to her building a new “handmade life”. 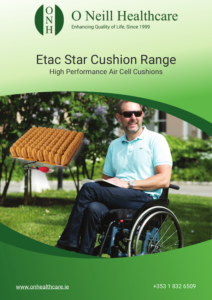